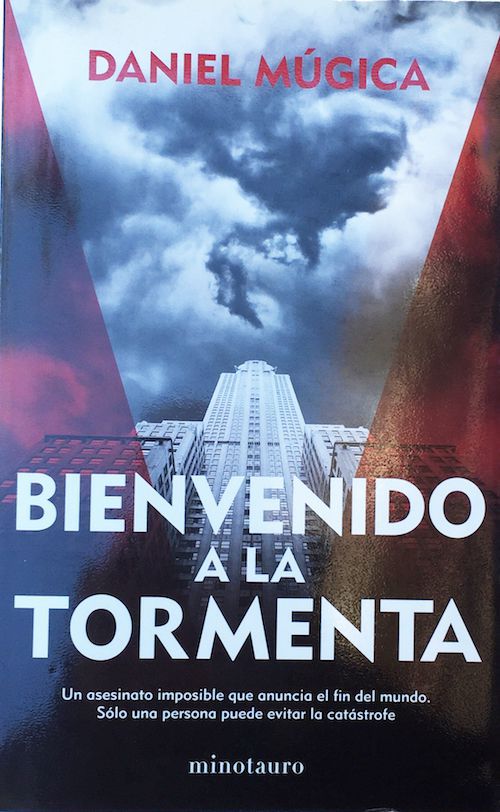 Consider that the commitment is not a tangential but a generic one. In this book, there are demons, werewolves, archangels, vampires, ghosts and trolls. Altogether at the same time. At the onset of the novel, at the Vatican city, they find out that the Holy Shroud has been stolen; the original Shroud, not the one of Turin. So, Pope John Paul II deduces that the fact has something to do with Lucifer; and with King Arthur. It happens that the Holy Shroud provides “the key to Camelot”. Grosso modo, these are the fantastic coordinates of “Welcome to the storm”. Curiously, they delimit a territory without boundaries. Equally fits in it “a thag member, the Hindu secret fraternity of Stranglers” and a perverse Nazi old woman, who maintains correspondence with Anders Breivik, the killer of Utoya. The accretion is rapid and inexhaustible. Sometimes reminds us the happy “pulp” adornments, but, generally speaking, it is much more incomprehensible. This happens because, beneath crimes and series of demons, sects and werewolves, there is a realistic and moralizing interest in the book. The book starts with the murder of the Secretary-General of the United Nations. The body of the Pashtun Mustafa Sharif is discovered eviscerated, tied to the spire of the Chrysler Building. As everything points that the crime has been committed by the satanic sect of the Euchites, the US President assigns the case to Allegra Herzog, a private eye who specializes in the paranormal and is leader of the Band, “a clandestine organization that fights evil”.

Allegra Herzog is the daughter of a legendary pirate and a beautiful aristocrat vampire slayer, niece of a first-class Jesuit exorcist, that is, the young lady dogs a DNA favorable to parapsychology as well as a big load of remorse. Think of a character that sometimes speaks to archangel Gabriel and some other clenches the jaw and drinks somber whiskey, as any “noir” character. After this point, the novel rushes to action, traveling and striking incidents. For example, sex scenes are abound, sometimes between human beings, some others between creatures of the night and others between different representations of both groups. When reading some of these settings, a malicious reader cannot escape from the idea that there are movements towards the “best-seller” universe and that “The Da Vinci code” just intersected “Fifty shades of Grey”. However, there is something that makes the book of Daniel Múgica excel these best-sellers. It is better written. The style of the novel is meticulous, ambitious and incessantly literary.

Daniel Múgica is a novelist that kindels the public’s interest. He has an extraordinary inventiveness and he knows how to construct the novelistic architecture with avant-gard materials. Welcome to the storm starts with the murder of the Secretary-General of the United Nations, who, glazed with blood and frost, is found yoked upon the spire of the Chrysler Building in New York. This brings about a crisis that the private eye Herzog tackles, while the world is dancing at the edge of the third world war. Daniel Múgica wrote a frenetic story that disconcerts. The reader will not regret entering into this unique novel.

Many of us had almost assumed that the writer Daniel Múgica (Spain, San Sebastián, 1967) would not come back into the novelist territory, that he probably would not offer to all readers a new shamble of his narrative work, after his last novel been published in 2000, under the title Mala Saña; that was a science fiction novel with a lot of violence in it that gave received so many compliments but also doubts.

Twelve years without publishing are enough and the reader already thought that Daniel Múgica was reluctant to publish a new book or that he had already abandoned the literary creation.

However, we must make clear that all these years Daniel Múgica never stopped writing, or reading or improving himself as a writer; furthermore, in these twelve years, he wrote other things, cinema and tv scripts, and he directed himself many shorts and two full-length films.

Múgica is an artist, a real, gifted writer and he has many things to say; he needs to express himself, experiment, challenge himself with various genres and media. In literature, he has attempted all genres, he dared with everything, even with childcare’s and young people’s literature, proving that he is a writer for all seasons and that everything he has done is made with a lot of care, mastery and style. Múgica is an author that literarily never let down his public or himself, and this is evident in his work until 2000.

Fortunately for his many readers and for the ones that have not read him yet, the strong and powerful voice of Múgica is still lifeful and ready for everything. We can verify it with “Welcome to the storm”, his awaited new novel that does not let down the reader. It is an entertaining but also profound story, an enjoyable for non-stop reading but also pensive, existentialist and committed to the world that we happen to live in. He has always been a very personal author, far away from opinion or power groups, from any kind of commercial and ideological influences, and anyone can perceive it once again in “Welcome to the storm”: Múgica does not sell himself out for anything and to anybody; he writes the way he likes and he says what he likes to say – he has always done so, since he published his first book, in 1988, at the age of only 21 – so, this noir fiction novel is, in any sense, a full adventure for the reader, anything but light or easy.

And so adventure: for the novel cannot be defined only as belonging to noir fiction genre; in it there is a lot of adventure novel, where fantacy and reality are entangled in a disconcerting way, resulting to a powerful and emphatic story, lyrical and pessimistic that can leave no one indifferent. His literature is a direct kick in the throat. Furthermore, Múgica keeps caring a lot about language, as he usually did; he does not use a functional language, for the usage of the words is very important to him; hence, he neither let himself be dragged by it, nor he flirts with style creating vacuousness: he achieves a balance between form and crux that makes the whole story progress like an unstoppable river.

“Welcome to the storm” is Múgica’s best novel ever. So long without publishing – still, keep writing and growing – results to a fully-evolved writer, in full command of his narrative virtues. Múgica was already a good writer, stylish and filled with literary breath, really recognizable, and he is now totally confirmed. He is older now and that benefits him. Even still in the 1990s, when he burst into as one of that Generation X Spanish writers, it was obvious that he was not a short-running writer, and he had inside a lot more than the meaning of that title.

There is still a lot of Múgica. This is good news for Spanish literature.